Deep Water will be THAT book. The 2022 Book. The one everyone talks about… 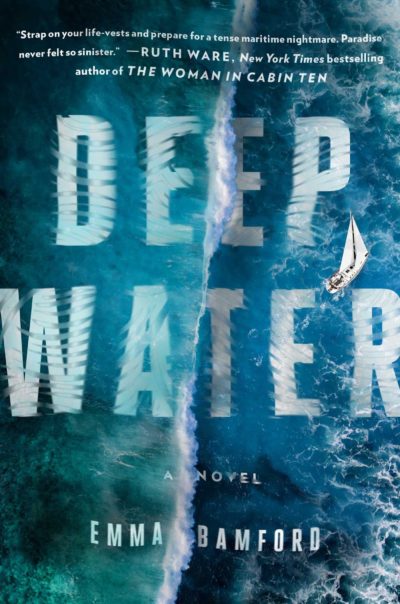 Mark my words, Emma Bamford will be the author of 2022. Her name and book, Deep Water, will be spoken about in the media, book-clubs and amongst the writing community. You know those books that have everything going right about them? Exciting plot, unique concept, impeccable writing? That’s Deep Water. Remember how popular Where The Cawdads Sing was? That’s Deep Water.

I’ve had the pleasure of being sent Emma’s proof and…Um…all I can say is there went my Sunday. Just SUCH a clever concept and Emma has the experience and tales to tell this suspenseful and thrilling, yet real and beautifully written novel. This is commercial without being “commercial”. Emma’s writing is languid and smooth and full of imagery that makes you taste the tropics. But I realise this isn’t meant to be review, this is about how Emma Bamford got her “yes”.

I first heard about Emma when I saw my face below her book on the Frankfurt Book Fair catalogue and I knew then just how HUGE she is. We’re both represented by Darley Anderson, and I’m so happy to be surrounded by authors like Emma. Take a look at how Emma made it.

I trained as a journalist, so I’ve been writing and editing for (ahem!) 21 years now. I first started writing fiction when I was in my mid-20s. I wrote a full draft of a novel and even went so far as to send it out to agents. This was in the pre-email days, in London, when you’d print out the first three chapters, or 10,000 words, or whatever they wanted, add the synopsis and cover note and post it all off, including an SAE. Weeks or months later I’d open the front door and see an A4 envelope on the mat with my name and address on it in my own handwriting and know without opening it that I’d been rejected. That’s a very particular kind of pain! Although those agents were definitely right to reject me – it was a truly terrible manuscript, and will remain in a locked drawer (aka a defunct floppy disk) forever. I did learn a lot from the process, though, including the fact that I could write something as long as 80,000 words. The longest thing I’d written before that was my university dissertation, which was a mere wisp at 8,000 words. In my late 20s and early 30s I became too busy in my day job to have any headspace to write creatively. As a news editor and a features editor on a newspaper, I was reading and re-writing tens of thousands of words a day, often for 12 hours at a time. It took taking a break from my life – I spent a couple of years travelling around the world on yachts – to give me the time, energy and inclination to get back into writing creatively. At first, influenced by my journalism, I wrote narrative non-fiction, two travel memoirs about my experiences after I answered an ad for ‘crew wanted’, quit my job, rented out my house and bought a one-way ticket to Borneo to live on a boat with a man I’d never met. Casting Off was published in 2014 and Untie the Lines followed in 2016. I wanted to try fiction again, but life and work got in the way again. Yet I kept returning to this idea I’d had while I was sitting on a yacht in South East Asia, looking out over the bow onto a deserted island, about what might happen to a bunch of sailors in so-called paradise. I joined a writing group in London in 2016, read a lot of books on craft, signed up for an MA in prose fiction and just kept chipping away over the next four years at what would become Deep Water.

When the pandemic happened, and all my freelance journalism work dried up overnight, I panicked. To distract myself, I decided to finally stop tinkering with my manuscript and send it off to agents. An earlier draft had been shortlisted for the 2019 Wilbur Smith Adventure Writing Prize, in the category for best unpublished manuscripts. I didn’t win the competition, but I had a completed draft of a manuscript sitting on my computer, because as part of the competition process the foundation had put all the shortlisted writers in touch with an editorial consultant. I had a copy of the Writers’ & Artists’ Yearbook, which I won in a competition, so I got a highlighter pen and went through it, picking out the names of agents who might be suitable and cross-referencing their websites. I drew up a spreadsheet (and I am someone who DETESTS spreadsheets) of about 50 agents, picked the six I most liked the sound of, wrote tailored cover letters to each of them and emailed them off, with a plan to cross off the names as the rejections came in and immediately send to the next person on the list.

Well! I had a reply within 15 minutes and a phone call requesting the full within a couple of hours! I think lockdown and working from home had sent everyone’s schedules off course. Of the six, I was offered representation by three. One rejected me with a polite but stock response, one rejected me in such a lovely way, making me think it was his loss, not mine, and the sixth I never heard from. I had Zoom meetings with all three interested agents over the course of a week or so, and did a lot of agonising over which was the best way to go. I chose Camilla Bolton at Darley Anderson Associates in London. She said the most wonderful things about my manuscript, and I felt that she really got the story and was interested in my future career as much as she was in Deep Water. She also represents her writer in both the UK and the US, and I liked the idea of only having one agent, rather than working with a partner agent in New York.

I had four requests for the full within a couple of days. Once I received the first full request, I emailed all the other agents to tell them that, and three others also requested. I did the same when I received my first offer of representation. One rejection followed, but then it was up to me to choose, which I am aware is a very privileged position to be in. I’d had an agent in the past, for my second non-fiction book, but she’d since moved on from that agency and was now representing children’s fiction, and I knew that with my next agent I wanted to (hopefully) have a longer relationship, so I asked a lot of questions about how they worked and about how they viewed my book in the market.

My agent tells me it was my cover letter that got her interest, before she’d even read any of the sample chapters. Definitely tailor your cover letter to the agent – show you know who they represent, and what they’re looking for. I only contacted agents who represent thrillers. I followed an example in the W&A Yearbook: brief introduction to the MS, with a paragraph on what it’s about, a couple of comparative titles, and a bit of bio, including the shortlisting in the competition and my previous publications.

Disbelief! Followed by shaking. And then some jumping up and down! Once I’d chosen Camilla, having to let the other two agents down was a horrible feeling, akin to breaking up with someone, albeit in the early stages of a relationship. They were both very gracious about it – I guess they know what it feels like to reject people.

Deep Water is coming out in the US/Canada on May 31, the UK/Commonwealth on July 7, and then in the Czech Republic and in Russia. I’m working on helping the marketing and publicity teams at Scout Press and Simon & Schuster UK get the word out, while waiting for my editor’s notes on my second thriller to come back (I was offered a two-book deal). I’ve written this one in a year, and it’s in a much rawer form than Deep Water was when they saw it (which is a horribly exposed feeling), and I’m expecting a lot of re-writing to follow. Then I have an idea for a third novel, but I want to focus on these first two and let the third story and characters ruminate a bit before I put fingers to keyboard. And in the meantime I’m now being sent proofs to read and/or endorse, which is a lovely bonus!

I will be doing a real review of Emma’s debut thriller on my Instagram page. And you can also follow Emma on hers. You can also preorder Deep Water here and trust me when I say you will not be disappointed.

Thank you so much for coming on the blog, Emma!

And thanks for stopping by, readers.