I’m glad Ashley Goldberg, debut author of Abomination, tells it like it is in this interview. He discusses 3 realistic aspects of publishing that hopeful writers need to know. Firstly: luck plays an important role in securing a deal with a publisher or agent. That’s right! Even the most talented author has been rejected. Secondly: timing is everything. Meaning, publishers/agents need to be actively looking for new talent. Thirdly: you may not get published just because you have an agent. Ah, this is a biggie for me and something I wasn’t aware of.

Because Ash has just freshly gone through the experience of submissions, querying and rejections (again, providing us with a truthful account of how many agents rejected him), his interview provides an honest, up-to-date and relatable page of information for writers who are about to start submitting. Abomination has just been published this month through Penguin Random House Australia and was shortlisted for the 2020 Kill Your Darlings Unpublished Manuscript Award. Ash is already being commended for his incredible writing and intelligent story and it’s lovely to read about how the short-story writer used his skills to “pour himself onto the page” to write a full-length novel.

I started writing in my early twenties, around fifteen years ago. I’ve always loved reading, ever since my father read R.L. Stine’s Goosebumps to my brother and me when we were small and I, impatient for the ending, would sneak them off the shelf and finish them on my own. Like many who love to read, writing felt like a natural aspiration. But it wasn’t until my first few years of university that I made the conscious decision to be a writer. And so I wrote, I grit my teeth and poured myself onto the page, and it was . . . complete garbage. But I suppose not everybody can be Sally Rooney and write a bestseller in their twenties.

In 2017, I completed a Master of Arts in Creative Writing at Bath Spa University in England. By the end of the degree most students ended up with a manuscript of around 60,000 words, mine was a short story collection. In addition to the hefty word count requirement to keep me motivated, part of the allure of the course was a post-graduation soiree in which agents and publishers were presented with an anthology of extracts from students’ work. Several students received requests for full manuscripts from this event. I had one request but ultimately the feedback I received was that short story collections don’t typically sell well and often need to be accompanied by a novel. When I arrived home I got to work on that novel and once it was finished I went about querying about 50 agents, largely in the UK and America, and from that pool I received only three full manuscript requests, including one from the agent who would end up representing me.

It was a full manuscript request which I received only a few days after seeing the manuscript. An offer of representation was made about a week after that.

My agent and I discussed a few structural changes to the manuscript which I worked on for about three or four months before we went out on submission. I think my agent sent the manuscript out to around seven different publishers and fortunately Penguin Random House Australia snapped it up. I think luck plays such a major part in the publication process. Obviously I had confidence in my work and thought it was deserving and ready for publication but so much of it seems to be about being in the right place at the right time. For instance, I’m no longer represented by the agent who helped sell the book to PRH (we parted very amicably) but if not for his presence at that time, I’m not sure my publisher would ever have seen it.

Try and find out as much about the agent and their manuscript wish list as possible, then don’t just quote it back to them, give pertinent examples of how your manuscript specifically appeals to their wishlist.

The offer of representation was exciting, but I was very wary that it didn’t necessarily signify that the book would be published. For the publication contract on the other hand, I don’t think I slept that entire night. And then there was about a week of negotiation in which I was terrified PRH would revoke their offer for some reason. Even now, with the book published and in stores, it’s hard to believe it’s real.

Short fiction is my first love and my favourite form of prose—I’m always writing short fiction and I hope to have a collection one day. Other than that, I’m also working on a new novel that explores a relationship between a young man and a much older woman, and the idea of limerence—a state of all-consuming infatuation with a person—among other themes, including some related to religion and Judaism.

I absolutely the love the sound of your next novel, Ash! And thanks for sharing your honest story with us (warts and all). It’s a hard gig getting picked up by an agent, let alone publisher, and you are proof that persistence pays off.

You can learn more about Ashley Goldberg here and purchase his book, Abomination here! 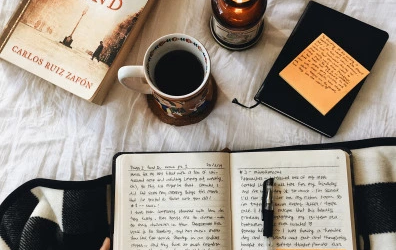