From BBC World Journalist to Published Author, David Allan-Patale reminds us that “Rejections are good if you take them right.” 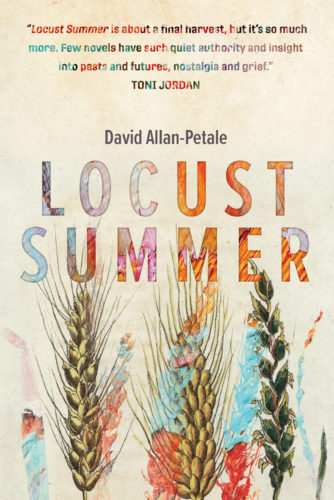 I first met David Allan-Petale, debut author of Locust Summer, out at a writers soiree with other Western Australian authors. At that stage, I had an agent, but no book deal. David was really reassuring that night, and I loved hearing from a debut West Aussie author. He spoke about his journey from BBC World reporter to published author with Fremantle Press and the highs and lows in between. I recall looking up to him, imagining what it would feel like to be him. He was on a high, his book almost about to be released. I could see how thrilled he was. Not only was his novel about to be on the shelves, but David had been shortlisted for the Vogel Award and earned a fellowship residency at Varuna, The National Writers’ House. He was happy, really happy.

And in a blink of an eye, David has gone from that night to now, with Locust Summer popping up everywhere on socials, in conversations, as part of the Perth Writers Fest. His name is being mentioned and his work highly praised. He’s being invited to events all over Perth, to run presentations and workshops. He’s basically getting involved and making himself know, and this is the sort of manner newby authors need to adopt. David gives us lots of advice and it’s a pleasure to have a debut West Aussie here on the blog today!

Like many writers, I started by creating my own books as a child. I still have many of them in a box, all typed up on classic computers by a teacher’s aide or written and illustrated by hand. And I have plenty of bad teenage poetry, movie scripts, and short stories that ape the writers I wanted to be like.

Writing for myself took longer. I worked as a journalist in my twenties and thirties and focussed on that kind of writing – fast, rough, quick takes on things that were happening. It took me to some amazing places, working with GWN and the ABC in regional Western Australia, and then internationally with Al Jazeera and BBC World in London.

But at the back of my mind always was that need to write. To create my own stories again. After my grandfather died while I was in London, I joined a writing group called Chalk the Sun, which met in a Balham pub. I started writing my first novel, which I completed while travelling in the Caribbean while on a five-year bout of travelling with my wife. That was my apprentice project. Then I started Locust Summer, and when that was published, I began another. Once kindled, like a stump fire, writing never goes out.

In 2017, I submitted the manuscript of Locust Summer to The Australian/ Vogel’s Literary Award. It was my last chance at the prize for writers under 35, and I was very surprised to get on the shortlist along with four other amazing writers also in their 35th year – the last chancers! I didn’t win, and though I enjoyed the party on a Sydney rooftop, I wasn’t picked up for publication either, though all the other writers were.

You can’t always get what you want. But you get what you need. Because a few months later I was selected for a fellowship residency at Varuna, The National Writers’ House in the Blue Mountains where I went through a very long process of redrafting Locust Summer. This work kindled and coincided with an 18-month long caravan trip I took around Australia with my wife and baby daughter, so I had the time and space to write and really focus.

Deep into the process, I enlisted the help of WA writer Laurie Steed to mentor me through an editorial process to improve the work, which was transformative. When it was done, I worked through my options for submission, starting with seeking an agent, and sending the MS to contacts I have at major publishing houses. I reached out to several agents and publishers, who all read the MS and rejected it, with only one offering some advice on improvements, which I took with alacrity! So, back to the drawing board…

I shared my stay at Varuna with some great writers including Toni Jordan (Addition, The Fragments) who I reached out to for advice. She advised me to do two things: pick a publisher that reflected my values, and only seek an agent if I couldn’t get that publisher on the phone. That cleared things up perfectly.

I have admired Fremantle Press for a long time. And thinking very deeply, I wanted to establish a literary career where I am free to pursue my artistic vision at the foundation. Freo Press was perfect for that. A not for profit whose distribution is handled by Penguin – the best of both worlds of art and commerce. And I could get them on the phone. So, I submitted Locust Summer to them – the full manuscript.

I heard back from Fremantle Press with an offer for publication within two weeks, which was amazingly quick. I’m told the whole office read the manuscript, which was taken to a board meeting and approved straight away. I was visiting a ginger farm in northern Queensland with my wife and daughter when I got an email saying to call them. I rang Georgia Richter, who became my editor, and she told me the good news.

The contrast between the yes and the long, slow, painful slog of all the no was profound. I had waited and waited for emails, phone calls, and inevitable rejections for years. Now there I was, contract on the way, zero to one hundred in three seconds.

All up, over the decade of wring and rewriting Locust Summer, I can count 37 submissions and 36 rejections – I don’t include competition entries, or where I don’t hear back from the publisher or agent. They all hurt. I won’t deny that. But I’m proud of them all. We submit to conquer. And I’m happy to have the scars that led to better things. I’ll give you an example:

When I submitted Locust to an agent, they were excited to read it, but got back to me quickly with a no, saying the extract didn’t live up to what I’d promised. That it didn’t hook them, and I should get some writing lessons on how to do that.

That stung. But once I’d shunted my ego aside, I got the message. I had submitted the first three chapters. If it wasn’t luring a reader in, then the story needed reworking. I got under the hood and really dug into the story mechanics, souping up the engine and making everything purr.

The next submission was the successful one to Fremantle Press… rejections are good if you take them right.

Put the work in. Follow the guidelines to the letter. Rejections happen over the smallest things, not just the quality of your opening sentence. If you are pitching to a publisher, consider very deeply what they publish and how your book aligns with that history and magnetise your approach to that. If you can’t, perhaps it’s not the home for your book. And be professional. If you get rejected, they will forget your politeness, but always remember any rudeness.

Relief. I felt so incredibly relieved. I cried a bit – sheer joy. Then felt very deflated, as though I’d just crossed the finish line of a marathon with nothing left in my legs. After a few celebratory drinks with my wife, I put my daughter to bed and got my laptop out to do my words for the day on a story I was working on. And I laughed and laughed. The page was still blank. The words still had to flow. Nothing had changed, yet everything had changed.

I’m working on a new book that I have been writing since 2016 or so. Whenever I completed a draft of Locust Summer, I’d work on this book while the manuscript marinaded in a drawer or was reviewed by a peer. Now that Locust is out, this book has become my sole focus, and I’m about 50k words into a new draft, the world forming right and the characters coming to life. Exciting times – to have a story to tell that’s just mine, at least for now (I hope!).

Because while I’ve greatly enjoyed the publishing process and now sharing the book with readers, I’ve learned it’s a very separate space from writing. I’m enjoying the early morning writing sessions where it’s just me, steam from a cup of tea, and the page.

David, fans are going to be itching to get their hands on your next novel! Thank you so much for being on here today and sharing your experiences with us. Congratulations on the success you’re having with Locust Summer.

If you want to learn more about Dave and his writing journey, you can follow him here and purchase Locust Summer here.