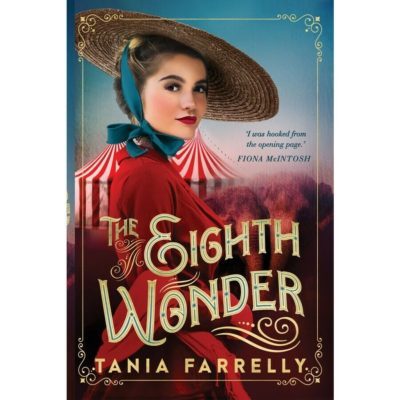 I must admit I got goosebumps when I read debut author, Tania Farrelly’s story about how she skipped past the agent part and went straight to a Penguin publisher. After being unable to write for some time, due to work and life commitments, Tania finally decided to take the reins on her writing aspirations and enrol into a writing course. This step in a writer’s journey tends to sky-rocket writers into deals, negotiations, networking, and writing successes. It really, really, helps to listen to Tania’s advice as to how to write a cover letter, synopsis and pitch as Tania signed her stunning novel The Eighth Wonder with Penguin 17 days upon submitting! Yes, that’s where I got the goosebumps!

Tania is another author who I’ve interviewed now who enrolled into a great course and the course became the turning point into her success story! So if you’re a hopeful writer reading this, I’d take that part out of this interview.

I’ve been writing one way or another all my life, but I really only started writing in earnest (i.e. with daily commitment from October 2018) when I started The Eighth Wonder. Let me explain.

I had worked in advertising as a brand strategist and researcher for well over 25 years and then gone on to run my branding business – all of which I count as my writing experience. But I had always harboured an ambition to write a novel, just for my own personal interest and for posterity – I imagined that sometime down the track my grandkids (which I don’t have yet!) might find an old manuscript in a dusty attic written by their grandma and make a connection with a younger me. (Sounds like a plot doesn’t it?)

Anyway –  in 2015 I enrolled in a creative writing class at RMIT but I really struggled. I was one of 30 people and it was only two hours a week for 12 weeks. The outcome was, I lost my confidence and so I stopped writing for awhile, until, in November 2017 I was reading Tania Blanchard’s A Girl from Munich by a pool in Borneo and came across Tania’s dedication to Fiona McIntosh’s Masterclass. I emailed Fiona and took the leap. I did her 5 day Masterclass in September 2018 and started writing The Eighth Wonder two days later.

In October 2019 at Fiona McIntosh’s National Conference I pitched The Eighth Wonder to several publishers, one of whom was Ali Watts from Penguin Random House. I didn’t send the manuscript off straight away, however,  I decided to send it to a close (and very brainy) friend, my sister and some of her colleagues in New York and naturally, my mum. After their feedback I also had it structurally edited by a professional editor. It was a rather indulgent investment at the time,  but worth it. In May 2020, heart in my mouth,  I packaged up my synopsis and manuscript and pressed send.

1.In your pitch, make a key emotional connection between you and the publisher by talking about what inspired your idea. Give them an insight into you.

– why its relevant to the genre reader

– who or what drives the story

Once you have these tightly worded, use them as your mantra.

Utter speechless disbelief –  quickly followed by ‘Where do I sign?’  (in case they changed their minds.)

Now writing and researching another historical fiction novel for Penguin.

Wow, Tania, this is such an inspiring interview for all writers out there and your advice is relevant and useful! I really enjoy reading about the success stories, and the ones that happened quite quickly. It proves that even though this business can be long, tiring and sometimes made to feel like an endurance test, there are always the exception. Write a brilliant book, enrol into a course to help your write it, take it to someone who can assist with editing it and then submit!

You can follow and learn more about Tania and her publishing journey here. And purchase The Eighth Wonder here.

Thanks for coming on here with us, Tania and thanks for stopping by, readers!